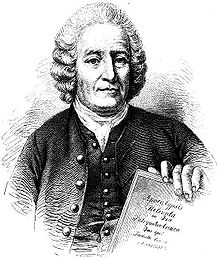 Because of my interest in all things spiritual, particularly the afterlife (obviously), my YouTube playlist would occasionally bring up a video by offTheLeftEye, hosted by a charming young man with startling blue eyes claiming to represent something called ‘The Swedenborg Foundation’.  The information presented spiritual ideas that were different, and yet familiar.  I wondered, who or what is this Swedenborg fellow?

As soon as the video discussion began to turn toward Jesus and the bible, my prejudices kicked in and I nearly turned it off.  I didn’t want to listen to dogma.  I kept it on, though, trying to keep an open mind and I realized that this was a Christian philosophy that I could relate to.  What this young man with the startling blue eyes was saying sounded like what Christianity could have been, before the centuries of dogma and lust for power corrupted it.  Even Swedenborg himself wrote books admonishing the Christian church of his day (1700s), realizing that the core message was being distorted.

Don’t worry, I’m not converting.  But I wanted to share this with my blog because I think the spiritual ideas covered are not very different from the spiritual ideas we explore in new age or spiritual philosophies, but with a Christian flavor to it which might appeal to some people who have been raised Christian but have been disillusioned by it. I’ve watched more videos from this channel since, and I’ve enjoyed them.  If you were once a Christian and currently exist in a nether world between Christianity and new age spiritual beliefs, give this a try.  I believe it reinterprets the bible and the message of Jesus in the way that it should have been intended, while integrating some very insightful and surprisingly modern spiritual ideas that I definitely recognize from my own research.

So who is this Swedenborg?

He’s a video introduction that does his life and works better justice than I ever could, from the Swedenborg Foundation:

Although I believe that lapsed Christians could benefit the most from Swedenborg’s works, I think the spiritual truths Swedenborg presents are sound and I would recommend both the video series, offTheLeftEye and the books to anyone who is seeking a unique spiritual perspective beyond what is commonly parroted in new age literature.

Here’s a sample of a video specifically describing what Swedenborg says happens when we die, which I am posting as an example so you can compare to existing literature you may have studied.  Curtis Childs hosting.

Join 1,269 other subscribers
Follow The Search For Life After Death on WordPress.com