Warning: This post discusses death and descriptions of the moments afterward, as told through past-life regression, mediumship transcriptions and other sources.  If you feel this post will bring up painful memories or fears, please consider carefully before clicking through.

Type the words, “What is it like” into Google and the rest of the sentence pops up immediately; “..to die?”

Its a question we’ve all wondered about at some point in our lives; whether its during those moments when we consider with some apprehension our own mortality, or whether we are in the midst of grieving the loss of a loved one.  From an observational standpoint, we are familiar with what occurs physically at death; however what it feels like from the perspective of the person experiencing it is still a mystery, at least to science.  In this multi-part series of posts, I’d like to take on this subject from a spiritual standpoint, poring through the evidence to relay from the point of view of those who have actually experienced it: “what is it like to die?”

I realize this is a dark subject to discuss, and my intent is not to salt the wounds of the recently bereaved who may happen upon my site.  On the other hand, I believe that reading the reassuring words of the many people who have come back across the veil to bravely tell us of their experience can be of great comfort. While their experiences, thoughts and reactions are unique to each passing, there is a nearly universal message of healing, peace and the distinct feeling of going ‘home’.  So if you are open to considering the spiritual evidence that is available on the topic, perhaps it can help to demystify what occurs at death, even if such taboos make the subject delicate.

Accounts of death and transition are selected from over a century of mediumship transcriptions, channeling and life-between-life regression experiences. In places where you see this symbol, […], I have skipped sentences and/or paragraphs from the original text for the sake of brevity.

Note: While I have found no indication that any of these original sources are fraudulent, I would always encourage the reader to determine the legitimacy of each of these sources for themselves.

Excerpt from Witness From Beyond: New Cosmic Concepts on Death and Survival, Mattson Taylor, Ruth. Copyright 1975 by Prentice-Hall of Canada

This highly-detailed transition experience is indicative of the kind of passing experienced by those in hospice or at the end of a long illness where transition is slow and more deliberate in nature.  Mattson’s entrance into the spirit world contains typical Christian imagery matching his expectations as a Reverend of the Lutheran faith.  Transition experiences are commonly personalized in this way to avoid disorientation, as explained to Mattson by his loved ones in the spirit world. Mattson’s description is straight-forward and matter-of-fact. Future examples, by contrast, will show more dramatic reactions to transition however, as Mattson was devoutly religious, his death and entrance into the spirit world were both expected and welcomed.  It is a wonderful example of a most gentle passing and welcome reception.

These communications were received by the English clairvoyant Margaret Flavell Tweddell and transcribed by AD Mattson’s daughter, Ruth Mattson Taylor. Communications amounted to 500 legal-sized typed pages produced over the period of two years.  The book that resulted, Witness From Beyond: New Cosmic Concepts on Death and Survival, contained portions of the communications that the author felt would be of interest to readers.

The last few days before I passed, I was coming and going, coming and going.  I was definitely aware.  You know if you are half asleep, you can be aware of somebody coming into the room and you just don’t want to wake up. You know they’re there and you think ‘oh, well, if I stay asleep they’ll go away’.  In the beginning I was conscious of my mother, of my brother, and my father around me.  I was conscious of going to other countries and other places, but I really didn’t want to go. I wanted to stop where I was. That was the physical body holding me. I would come back and I would tell you where I’d been. I was very aware of you and Al there [A.D.’s children] with me in the room. It was good to have you there. I needed you. There was this tug between going and staying and going and staying. As I went more and more, I loathed more the coming back. I felt regretful to leave, but I felt shut in when I got back.  But not truly shut in because I wasn’t properly in my physical body.  I was partially in and partially out. My body became a very uncomfortable vehicle. It became very clumsy.

My feet were so clumsy. I didn’t feel as if I could move my feet somehow.  They were like heavy clogs.  They didn’t feel like feet. Then the rest of me began to feel heavy like that and it was an effort to lift my arm up. It was an effort to turn my head. I began to feel as though I didn’t have enough effort.  But it was so easy to go out and be out there. There was no effort to do that.

Then I thought that I really must stop this business of seesawing. I looked up in the air, and I saw something like a seesaw.  And it was hard to put myself down and it was easy to stay up.  Suddenly it became borne in on me that I had to make a decision. We all have to make the decision, really, whether we are going to struggle or whether we’re going to let go. This is why people are afraid of death. The people who lack positiveness fear death even more because they dither, ‘Shall I or Shan’t I?”

I felt there was much I’d left undone, but it was pointed out to me there wasn’t much I could do with a body like that anymore. My logical mind began to take over and I found myself saying, ‘No, leave me now. It’s enough. It’s enough.’ I wanted the woman [his nurse] out of the way. (AD had asked his nurse not to tend him anymore but to stand aside and leave him alone to die.)

Then I had this magnificent, wonderful vision. There were the gates. I had always envisioned that the entrance to my paradise would be through these magnificent gates. There’re gates of life – of light.  They’re living gates. They’re moving all the time. They’re not wrought iron or stone or wood.  There was this beautiful gate opening, and there were all of my family coming backward and forward to greet me.

I said, ‘Do you always have to go through gates like that?’

And they said, ‘No, this is because this is what you have always thought, and will have what you have imagined.  You built this.  This is yours – the gateway – your entrance of light.  You can have St. Peter, if you like.’

At that I had a little chuckle. I really didn’t mind whether I had St. Peter or not. I said I perhaps could do without St. Peter.  But then, as I turned my head slightly and looked, I saw a figure I knew was St. Peter.  I said, ‘I’m coming, I’m coming.’  He said, ‘Take your time, take your time. There’s all the time in the world.’  I thought, ‘There isn’t, you know.’

They tiptoed in and they looked at me. I didn’t see them with my physical eyes. I saw them blurred.

They said, ‘Are we holding you back?’

They were asking, ‘Shall we go and leave him or shall we stay?’

I couldn’t really tell them whether wanted them to stay or go. I just thought it was beautiful to have them there. I looked, and as I began gradually to leave them I had the most beautiful sensation of the complete unity with all things and all people.

Margaret, I had a most beautiful passing, a most beautiful passing.  I was conscious all the time. I thanked God for the body that I’d had, the opportunity I’d had, the children, and the gladness of the fact that my family and my wife were there waiting for me.  And yet, you know, just a little bit of me said, now come on AD, come on now, make-up your mind, make up your mind, stop drifting.  And I felt some hands take me and lift me.  And someone said, ‘Come on, stand up, what are you lying down there for? You don’t want to stay there all day, do you?’

Well, the rest seems to be just light and sound and music, and the looking back, and the sending my love, and going around to the back of my children and just putting my hands on them.

I think I must have slept a bit because I don’t remember.  I remember coming through the gates and hailing Peter and a few other people, and suddenly I was in the most beautiful garden, sitting in a chair.

And I was saying to myself ‘Rest, sleep – I’ve done enough of that. I want to get going.’

But I didn’t. Somebody must have hypnotized me because I slept and I rested. People came and went. I smiled at them and thought how beautiful they all were. They didn’t have any faces. They were just a lot of light. Ruby [his sister] came and she blessed me.

She said ‘Now look, they’re having your funeral service.  Do you want to go and look at it?’

I was still reluctant. I thought, ‘Dear me, suppose they say something critical of me?

And my wife said, ‘Oh, oh – you never did like criticism, did you? You haven’t changed a bit.”

Why did she think I would change? I’d only just come.  I had to laugh and I said, ‘Well, if I can stand up and if I can walk about and I can feel myself a man, a whole man, then I might go.’

And we went.  I really didn’t know much at all about what arrangements they had made for the service, but it was all done very simply and very beautifully, just as I’d wanted it.  I was doing a bit of eavesdropping as you, Ruth, and Al talked with people after the service, and then your mother said, ‘Come, come, you’ve had enough. Come on.’

I then went out into darkness, into the most beautiful, soft, enveloping darkness.  The man I have learned is my guardian said, ‘Come on, come on,’ and when he said ‘Come’ it raises you and lifts you.

I then had a nice, long sleep in a most beautiful bed in an arbor. And there was my lake and there were fish, but nothing like my cabin. It was the most beautiful, light and airy. 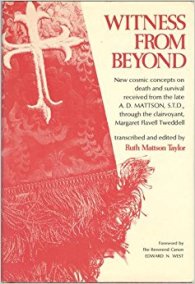 Witness From Beyond: New Cosmic Concepts on Death and Survival
by A.D. Mattson and Ruth Mattson Taylor

Available only in Paperback Format on Amazon – Click Here to View

Part II introduces us to a death experience as told through a life-between-life regression. The subject, “Sally” and her husband “Will” are met by a warring band of native Americans sometime in the 1800’s as they travel with a wagon train west. In contrast to the tranquil transition experience expressed by A.D. Mattson, the young Sally struggles with her passing until she is able to convince her grieving husband that she isn’t gone forever.

8 thoughts on “Passing On: Transition Stories, Part I”

Follow The Search For Life After Death on WordPress.com